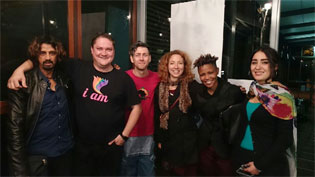 “To accomplish great things we must not only act, but also dream; not only plan, but also believe”

At Street Talk, we’re dedicated to capturing the gritty realism of life in South Africa; we’ve had conversations in many, many communities in Cape Town and have been exposed to both the triumphs and traumas of our remarkable country and its people.

A big part of what makes all this possible is the amazing people who make up the Street Talk team. Our researchers live and work in their communities, they tune in to word on the street to identify the issues that matter. Quite recently, one of our seasoned researchers has given us reason to be very proud.

Thembela ‘Terra’ Dick started her film career as a researcher for Street Talk in 2009, where she completed a six-month film course. She worked as a researcher for the film Thembi – the story of a young AIDS activist from Khayelitsha who died in June 2009. The film had its world premiere in Cape Town at the Encounters Documentary Film Festival.

In 2013 she collaborated with French women’s soccer club Association Les Dégommeuses and produced Thokozani Football Club: Team Spirit.  The documentary profiles the Thokozani Football Club (TFC) from Umlazi, Durban. The team consists of 21 black lesbian-women and is named for Thokozani Qwabe, a black lesbian soccer player who was brutally murdered in Ladysmith, KwaZulu-Natal in 2007. The film exposes the atrocities of Corrective Rape and shows how sports can be a tool for the emancipation of lesbian women.

This past week, Thokozani Football Club: Team Spirit was screened at The Durban Gays & Lesbian Film Festival. TFC founder and visual activist, Zanele Muholi, made Terra’s attendance of the screening possible. The film has also been seen by French and Brazillian audiences.

Terra, a proudly lesbian woman herself, is passionate about LGBQTI issues and hopes to further expand her career as a South African documentary filmmaker.

She’s certainly on her way to doing just that.

Can you believe we’re already gearing up for end of the year? 😱

B & L are grafting hard at... the office to bring you 🔥 content while we go on December break 😎

Are you ready for end of year festivities? https://www.instagram.com/p/CIAgfAmj4Xl/?igshid=8vcpb309hm5o

Make your voice loud and clear by voting tomorrow in the national ... by-elections.