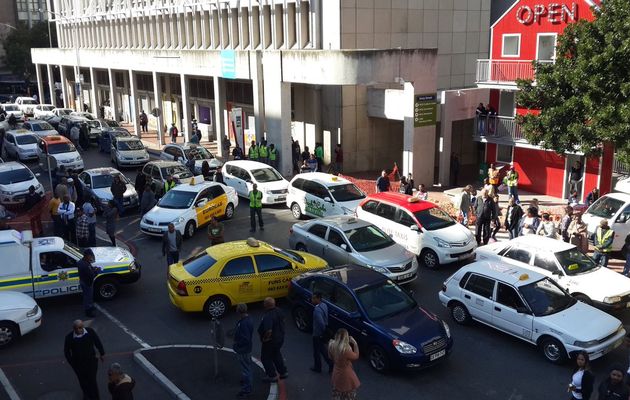 As recently as a few hours ago, there have been massive protests against Uber drivers in the Central Business District of Cape Town, resulting in a blockaded Long Street and swarms of people congregating in the area. According to the Sunday Times Live, “meter taxi cab drivers…reportedly smashed the windows of at least one vehicle in a protest against online cab service Uber.” A later article from the same news source stated that police had thrown stun grenades and made arrests in response to the commotion. Even as police arrived, however, taxi drivers continued to chant, exclaiming “Uber must go,” the Sunday Times reported. This protest has come just days after Uber drivers themselves led a protest outside of Western Cape government offices on Wale Street. Uber drivers have complained that unfair business practices, such as automatically firing a driver after he or she falls below a certain rating, and the new installation of the cash payment method, have put their jobs at risk. Moreover, according to GroundUp, the Uber system does “not show drivers the details of passengers,” which puts them at risk of muggings. The head of communication for the Uber Drivers’ Guild in Cape Town, Joseph Munzvenga, declared that “Uber drivers have become slaves on their continent.” Indeed, after Uber driver Charles Nyakuseka was found in a coma after being hijacked while driving in Mowbray, protests surrounding the franchise have taken on a deeper, and more urgent, meaning. It appears that those working both inside and outside of the Uber system are deeply concerned about the threats the company poses- and for good reason. Uber’s business practices have been criticized around the world as unethical, unsafe for drivers and passengers, and harmful to outside industries, such as the well established taxi industry. It remains to be seen whether the protests in Cape Town, which echo these nearly universal sentiments, bring about much needed reform within the company.