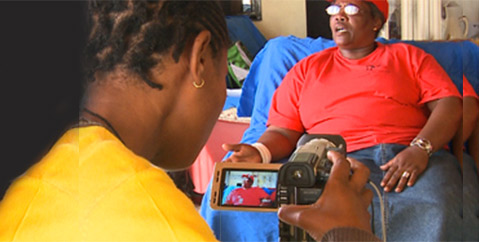 “In life, there are no true beginnings or endings. Events flow into each other, and the more you try to isolate them in a container, the more they spill over….the things we label ‘beginnings’ and ‘endings’ are often, in reality, indistinguishable. They are one and the same thing”

Every New Year begins with such promise, a clean slate and high expectations.  The Street Talk team is excited to welcome the new start. We ended off 2014 with a brand new season, below are a few samples from Season 6.

“….it got me down for a while because I couldn’t understand at that time. I did not know where to go, what to do, but when I realised there is a support group for people like me I joined the support group”

Along with the ill health and the threat of a fast approaching death, the HIV virus also comes with stigma and shame. Six South Africans living with the disease talk about the support, love and upliftment they find in their HIV support group.

“I remember when I decided to go and do music at UCT. My father took me to all the shebeens….he’d say, ‘See that guy sitting there? He’s a musician”

“I think it’s a great initiative…there’s a lot of people who are not exposed to Art…. when we come to these rural areas people are so overwhelmed and they enjoy it so much they don’t want us to leave”

Performing is some kind of magic; just ask singers Alistair Izobell and Fancy Galada; dancers, Vurswill Seconds and Sikhumbuzo Hlahleni; marimba player, Bongani Sotshononda, and saxophonist, Donveno Prins, as they prepare to dazzle small town audiences as part of the Artscpae Theatre outreach programme. An enchanting development where Artscape Theatre’s top performers travel to the rural areas of the Cape, bringing with them art, entertainment and performing. They describe the pure joy that unfolds as they perform to audiences who have never experienced the magic of the Arts.

“When people envy you…..instead of wanting to understand how you got there or how you achieved what you achieved….they hate you for being that person or they [set] a trap for you so that you fall”

We’ve all felt the cold stab of jealousy and envy at some point in our lives; the shadow side of our human nature. For Zintle, Ntombekhaya, Mkhululi, Zininzi and Zuzo they’ve had more than a few run ins with this nasty vice, within themselves, other people and in romantic relationships.

“There’s expectations involved…there’s pressure from your family, your parents, your friends and your high school teachers, it’s like they expect you to pass and make them proud and be a success, so its not only about you”

Sesethu, Ziyanda, Noluvo, Nomzamo, Zikhona have just started their new lives as students at the University of the Western Cape. Bright, spirited and determined to succeed; these young adults talk about the challenges, pressures and rewards that their new journey has ushered in.

“I feel like black women are doing more for themselves, they’re becoming more independent and responsible. I do look up to a lot of black women who are trying to make it out there. I am proud of our women in South Africa”

Charlie’s Angels have nothing on Sesethu, Ziyanda, Noluvo, Nomzamo and Zikhona. The ladies from Adapting to Varsity Life: Great Expectations had so much to say about life as ambitious women. Here they address relationships and women in power.

“We started this particular type of project…taking the theatre to the people….to implement our constitution…[we asked ourselves] how do we bring our people together that were divided….so we use the theatre as a tool….putting all our cultures on one stage”

Artscape Theatre is Cape Town’s principal centre for the performing arts. Every year, they travel to the rural areas of the Cape bringing with them art, entertainment and performing. In this episode, the programme’s coordinators describe the unifying effect that the Arts have on people and how this is such a necessary development in a country once divided.

“They shoot at our children at all hours of the night. And the police are phoned but they never turn up, so we step in and handle things ourselves. We call ourselves Rude Girls”

Can you believe we’re already gearing up for end of the year? 😱

B & L are grafting hard at... the office to bring you 🔥 content while we go on December break 😎

Are you ready for end of year festivities? https://www.instagram.com/p/CIAgfAmj4Xl/?igshid=8vcpb309hm5o

Make your voice loud and clear by voting tomorrow in the national ... by-elections.