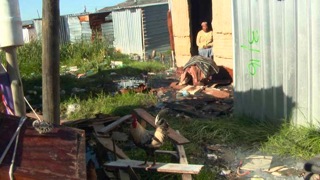 When the first Eastern Cape families arrived at Site 5, between Fish Hoek and Kommetjie, they optimistically named the new township Masiphumelele, which means ‘let’s succeed’ in Xhosa. A generation later, an estimated 40 000 people – many living in make-shift shacks – now call the 1 km² wetland their home.

This film captures the gritty reality of living in Masi – from flooded, trash-filled streets to leaking walls and ceilings, poor sanitation, and resulting illness and disease. Residents tell of the ever-present threat of shack fires, uneasy tension with foreigners, rising crime and inadequate policing.

With high unemployment and few job opportunities, drug and alcohol abuse proliferates. Residents feel the Government has abandoned them, and have lost hope for a better future.
But some occupants are fighting back. A neighbourhood watch patrols the narrow, winding alleys. Against all odds, some entrepreneurs have turned their love of music, sewing and cooking into small businesses. Residents share their fears, hardships, hopes and dreams in this snapshot of life in Masi.