‘Let’s Succeed’ – A voice of hope for Masiphumelele 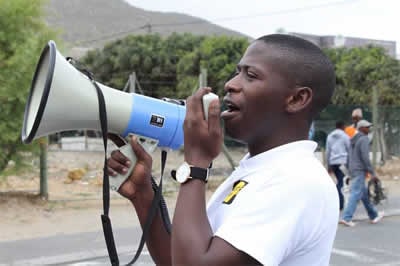 Community voices of Masiphumelele township will finally be heard, thanks to ‘Let’s Succeed’, a new documentary in which residents share stories of appalling living conditions, increasing crime and complacent leadership.

This was the view of some audience members who attended the launch of Street Talk’s latest film, ‘Let’s Succeed’ at the Masiphumelele Community Centre on 9 March, 2019.

“What is depicted in the film is exactly what you see on a day to day basis. And we are so grateful for that. Some of us feel like we don’t have a voice to speak about our frustrations, anger and issues to the authorities,” said Simphiwe ‘Simz’ Nkombini, a community activist.

“The film was an eye-opener. It’s going to make a difference. There are people that will see it and go out and change the situation,” stated Ndileka E Biyo, owner of Biyo Design.

‘Let’s Succeed’ takes a snapshot of life in Masi, both good and bad, as seen through the eyes of residents. It paints a picture of life in the township: squalid living conditions, the lack of practical solutions or progress, empty promises from government, crime, drug and alcohol abuse, shack fires, spread of disease and degrees of xenophobia.

It also provides hope, with several residents sharing how, against all odds, they overcame difficulties to carve out successful careers and develop their own enterprises.

“The film is very good – it is a true reflection of the people of Masi,” noted Misumzi Zilimbola, a mature student at Masicorp. “People are talking for themselves, not someone talking on their behalf. They tell of their troubles and goodness.”

Through its weekly television series, Street Talk films and broadcasts every day, uninhibited conversations between ordinary people from various Cape Town communities. The series, which often tackles controversial and taboo topics, breaks down barriers born out of past and present circumstances.

“This one-hour documentary takes an in-depth look at the lives of Masi residents, providing a platform for them to share the challenges they face, the hopelessness of their situation and their desire for a better future. They hope this film will be a catalyst for change in their community,” said Richard Mills, Director at Street Talk.

The pioneering families who arrived in the 1990s optimistically named their new township Masiphumelele, which means ‘let’s succeed’ in Xhosa. A generation later, an estimated 40 000 people – many living in make-shift shacks – now call the 1 km² area their home.

As rents skyrocket, families are forced to build shacks in the wetland informal settlement. Here, residents wake before dawn to queue for water. Children suffer from illness and disease due to flooded, trash-filled streets, leaking shack walls and poor sanitation. A nauseating, ever present stench cloaks the settlement.

Youth in particular need strong role-models. With high unemployment, few job opportunities, nowhere to go and nothing to do, drugs and alcohol as an easy escape.

But some, like music producer and rapper Andile Da O’ Thetha, are already acting to help them make better choices for themselves.

In the film, Andile reveals how he shunned peer pressure to smoke Tik in favour of pursuing his passion for music. He’s become a local legend, using his songs to highlight social issues in Masi. His music features in ‘Let’s Succeed’, while his message and performance at the launch made a clear impression on youth who watched the film.

“We learned that we must stay away from drugs and alcohol, and that they are bad,” said a group of teenagers.

“The film has already started the movement of changing the way youth and newcomers see things, and how they are going to approach life,” commented Andile.

Others who have succeeded include Ndileka E Biyo, who has turned sewing into a small business that employs two women from the township, and Noxy Lerule who owns and runs Nonny’s Bakery and Cafe.

Robert Mkhonza, who arrived from Zimbabwe several years ago, says it’s difficult to start again in a new place without family or friends. But the Masi community welcomed him and he has since settled into a new life. For him, the message from the film is clear:

“Even when things are not going well, you have to try and struggle until you can make a go of it. That’s what we have to encourage others to do.”