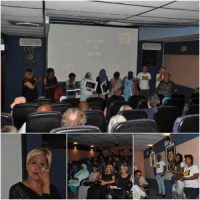 Strike a woman, and you strike a rock,” said Street Talk’s director Richard Mills, quoting from the famous resistance song that symbolises the courage and strength expressed at the Women’s March of 1956.

These words aptly describe the seven ordinary mothers who have become known as Hanover’s Heroines.

Amid tears and applause, the women were recently honoured for their courageous stand against gang and drug-related violence in their Hanover Park community.

Their willingness to forgive their sons’ murderers captured the hearts of the audience at the official ‘Gatvol’ screening at Cape Town’s Labia Theatre on Tuesday, 5 December 2017.

Children as young as nine years old are involved in the killings, which have turned childhood friends against each other and seen 35 people die in three months.

Screened during the 16 Days of Activism Campaign that opposes violence against women and children, the fallout from ‘Gatvol’ has been remarkable.

Speaking at the screening, Lesley Muller of Hope Community Development Project said that since ‘Gatvol’ aired on CTV and on social media platforms, there had been a marked reduction in murders. Only two gang-related deaths were recorded in November.

Moved to tears before her short speech, Lesley described the desperate plea of women in the community for answers – but no one was listening to them.

Together, they approached Street Talk to give a voice to the women who have lost their sons in the gang violence. “Street Talk allowed us to speak. We are honoured they allowed us to tell government and the international media about the genocide and for allowing us to put ourselves out there, stated Lesley.

“We are proud of being able to shine a light on what these women are doing,” said Street Talk director Jo Menell in his opening remarks. He said the Street Talk team worked to give narrative of the conversation recorded between the seven women. “In this case we edited very little. The moment we sat down the flow was unbelievably heartrending.”

Street Talk’s Banele Poni and Nosisi Sithole said the crew feared for their own safety when filming the series. “But we were motivated by our mothers taking a stand. We were dumbstruck by what we filmed.”

“As an editor it was very emotional. I am a sensitive person and it was difficult to detach myself from it. It was very moving seeing these women speak out and have forgiven their childrens’ murderers. All of [the woman] are very strong so I told myself to be strong,” said film editor Pretty Cetyna before the screening.

At the end of the event, the women were presented with framed portraits of themselves before meeting the audience over drinks and snacks.

The heartfelt message from the Hanover Heroines has already motivated more women to find their voices. “One woman had lived alone with her grief for 14 years, unable to talk to anyone about it. But after watching Gatvol, she decided to speak out,” said Jolene Henkerman, who attended the screening. She has lost four sons and grandsons to gang warfare.

“Gatvol reaches out to show our youth that there are people who care for them and will help them. It will also show other communities going through the same thing that we can stand together. This is only the beginning.”

While the senseless murders have torn families apart, the documentary has brought 18-year-old Kauthar Qassa closer to her grandmother, Kashiefa Mohammed.

Although concerned about Kashiefa’s health and the additional stress placed on her since taking a stand, Kauthara now understands why her grandmother is taking up the fight.

At first, I didn’t understand. But after watching Gatvol a few weeks back, I feel if this is what she wants to do, she should do it and I am giving her support. “It was a very emotional experience watching Gatvol on TV,” she said. “The tears were rolling; it was the first time I had cried since my uncle’s death. He was the same age as me and we were close friends.”

“I learnt a lot about what my gran’s life is all about. She has made a big difference in the community,” she said.

Both the Street Talk team, supporting organisations and Hanover Heroines believe the series has helped motivate the community, and they hope that their action will encourage others to mobilize their communities.

They also believe Government interventions, more activities for youth, stronger police visibility and unity between churches and organisations will build a better future for their children.

“The gangs’ biggest fear is when a community mobilises. They want people to take violence as normal. All programmes need to work together – when we rise up together its game over for the enemy,” Pastor Engel told the audience.

This week on @capetowntv - GBV in Lockdown.

Let's not forget that while we're encouraged to stay ... safe at home, this isn't the case for everyone.