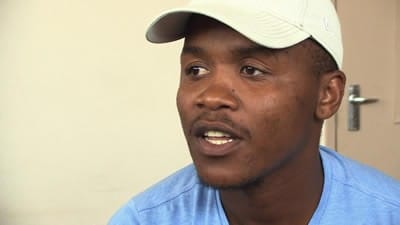 Soon after Street Talk’s High School Dropouts episode aired on 18 April, Zano Mramba, 28, who had helped research the insert and also shared his story on screen, received a telephone call.

The caller told Zano that after watching the episode on Daily Maverick, he wanted to help. In the programme, the five men share their reasons for dropping out of school and describe how the decision impacted their lives.

The man describes himself as “a Capetonian in the asset management industry”.

“The anonymous person offered R5,000 to each of us. I felt overwhelmed and thought: ‘I thank God for this!’” said Zano.
Zano says the donation enabled him to buy items for his new-born son and support for the mother of his child. He now hopes for a permanent job and wants to further his studies.

After dropping out of school in 2010 due to peer pressure, Zano realised there were few job opportunities for him without a matric qualification.

“Quitting school had a very big effect on me. I realised it was a trend to drop out of school. I regretted it.” So Zano returned to school and completed his matric in 2011.

But it’s been a slow start. Despite a lack of capital, he co-ordinated two marketing events last year, selling vetkoek to pay for the hire of tables and chairs. But with a baby on the way, he felt like giving up.

Then Street Talk asked him to co-ordinate and participate in an episode featuring five young men who had dropped out of school.

Although nervous, Zano hoped that sharing his story would encourage others to believe in themselves, go back to school and finish their studies. “People who saw us on CTV told us it was brave of us to talk about why we dropped out.”

Fellow participant Akhona Sigwele, 29, bought food and clothing with some of his money, and has invested the rest. He’s saving to get married, to buy a house and a car.

Akhona, who dropped out of school in 2004 after passing Grade 9, now has a job that doesn’t require matric. A lot of people saw him on Street Talk – an experience he is happy about.

The donor said that Street Talk was especially important in South Africa where the gap between rich and poor is so large.

“In the past I tended to dismiss points of view that differ from mine, but recently I’ve been trying to understand how other South Africans see things. I’m interested in education and how and why the SA system is not working. I was struck by how honest participants were about their own mistakes.

“They are young men like me, but with very different circumstances. I’ve received many second and third chances, they haven’t. So I gave each of them R5,000,” he told Street Talk.

“Unfortunately, I don’t think this is enough money to make a big difference, but I hope that it will bring them some temporary joy. Perhaps they will also see that someone cares about them.”

Zano says: “Me and the other guys appreciate what he did for us and want to thank him. He just wanted to give back.”

Zano hopes the gesture encourages others to “invest in our ideas”. “It’s difficult to make it out of a township if you don’t know people. But if someone helps us, our dreams can come true.” DM